When the legendary Swedish sport car Indigo 3000 resurface in a new guise, Conmore is responsible to implement the modernized engine management. 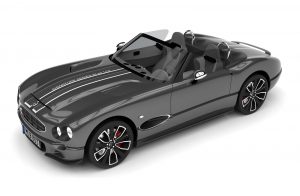 Indigo 3000R as the new version is named, has completed around 50 new design updates to meet today’s requirement. The changed has been within certain limits so the original manufacturing tools can be used today as well. Von Braun wants as much as possible of the original parts of the car to be used in the new version. For Conmore the project started when the consult at the site figured out how the old electronic system in the car was constructed, because cables and connectors were not labeled.

New electronic The motor was changed in the project, and with that more electronics were needed, and a new engine mat were then connected. Conmore suggested to modernize the entire electronic system because the car would easier get certify and it would be easier to change and upgrade when it comes to electronic functions and software functions. When they did the modernization they realized that they also needed to add new LED light and a new CAN-based electronic system for the car. Conmore did also connect new electronic boxes that Consat had custom just for this car.

Close cooperation The consult at the site got to work close with the mechanics from von Braun because a lot of work were dependent on each other. They changed fuel relay, main relay and start relay. The opportunity to a close cooperation had a big influence when von Brauns’ CEO at the time, Torbjörn von Braun choose who should get the project: – A big reason why Conmore got the project is the location between the companies, and Consat did also recommend that we should hire Conmore for this project.

According to Torbjörn, Conmores’ humble approach to the project and how they have taking care of their customer is a big reason why the cooperation has been so successful. – The cooperation was working well with recurrent project follow-ups and result- and goal assessment.